The Great Blue Hole, off the coast of Belize is a diver’s paradise.

Located next to Lighthouse Reef, about 70 kilometres off the coast of Belize, the Great Blue Hole is part of the Belize Barrier Reef Reserve System that was declared a UNESCO World Heritage Site in 1996.

Originally the Blue Hole was a limestone cave that started to form about 150,000 years ago.

Gradually the water level rose as the glacial period ended and the caves were flooded and its roof collapsed, thus forming this unique hole.

The hole was made popular by French explorer Jacques-Yves Cousteau who declared it “one of the top ten dive sites in the world.” 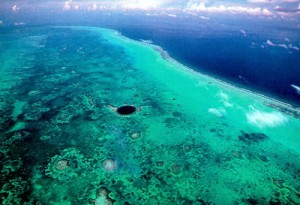 Great Blue Hole from above via JohnBullas

Looking from above, the dark blue color of the hole signifies that it has a great depth, especially compared to the shallow waters nearby.

Its deepest point lies at 124 meters. The hole has an almost perfect circular shape and it is 300 meters wide.

The Blue Hole is well known among the world of recreational diving enthusiasts, for whom this place has them all: clear waters and a variety of flora and fauna as you can meet here nurse sharks, Caribbean reef sharks and bull sharks. 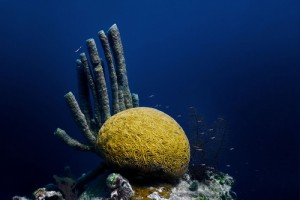 Underwater photo of brain coral, tube coral and trunk fish taken in the Great Blue Hole in Belize via JayHem

But if diving is not for you, you can also snorkel for a full day around the hole and nearby.

There are also many small islands or cays nearby that offer pristine beaches and affordable meals:

The most notable are Ambergris, which lies just off of Mexico’s Yucatan Peninsula, to the north of the Great Blue Hole;

And the Turneffe Islands, the largest of three atolls about three hours by water from Belize City.

Out of these, the Turneffe atolls are closest to the blue hole.